The land around Derrimut is steeped in agricultural history even though the residential area itself is newly developed. Located 17km west of Melbourne’s Central Business District, Derrimut is a suburb of the 2000’s and is the ideal location for professionals and families with children.

The suburb was named after a nineteenth century, Port Phillip, Aboriginal elder of the Boonwurrung Clan. Derrimut is remembered for having warned early white settlers of impending Aboriginal attacks, an act that enabled white settlement to happen earlier in the region.

A minor rise in the land was given the name Mount Derrimut. It was here in 1854 the Mount Derrimut homestead was built. This now forms part of the Mt Derrimut Golf and Community Club. 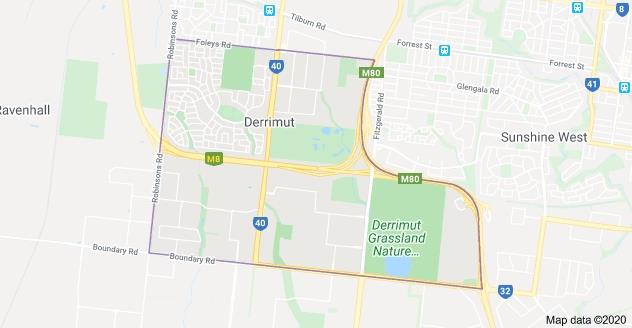 Hi, I’m Natalie Fisher of Fisher Conveyancing. I’ve spent my whole life around this region and know the ins and outs of Derrimut conveyancing and real estate transfers. If you have any question, give me a call and I’ll be happy to assist.

Derrimut’s residential area is separated from its industrial lands by the Western Freeway and the Mt Derrimut Golf and Community Club (est. 2007 and renamed 2018) on its eastern boundary.

Considered a large suburb, Derrimut’s population doesn’t align with this. Consequently, it’s population density is low at 6.4 people per hectare. In 2016 the census data recorded the population as 8269. Residents are a balance of males and females with an average of 3.6 people per household.

There is a strong family influence in the area, and this is reflected in the average population aged between 25 and 34 years.

The residential property market is almost entirely 3 to 4 bedrooms, 2 bathrooms and 2 car garage homes which is perfect for families requiring room to move while being close to the city. With a median price of $645k, the market continues to show an increase and has done since 2013.

The rental market is strong with hot competition amongst tenants. This is due to only 22% of properties being available in the rental pool. Vacancy rates dropped from 1% to .06% in the past 12 months.

Being family orientated, there are many childcare choices for that all important first step in your child’s education. Residents have access to several primary schools, generally within walking distance.

The junior campus of the Victorian University Secondary College is in nearby Deer Park as are several other secondary colleges that cater to a wide range of educational needs and learning styles.

Of course, being in such close proximity to the Melbourne CBD, a huge range of university opportunities exist for those furthering their education.

Mt Derrimut Golf and Community Club has a reputation as being the “Jewel of the West”. A par 72 championship golf course where you can embrace the city skyline views, while swinging your way around. For those not up for the big league challenge of the course, why not get into the swing with a little mini golf. The putt-putt mentality is a little more relaxing.

The local YMCA fitness centre has a swimming pool and there are multiple gyms for a healthy workout if you need to trim that waistline a little.

Many small and large parks are dotted around the area for those looking for the outdoor experience.  Additionally, walking and bike tracks are well used by the residents to blow out the cobwebs modern life creates. The easily accessible children’s playgrounds are maintained to a high level and are the perfect way to keep youngsters agile and entertained.  (And it’s a great time to catch up for a natter!)

Don’t be surprised if complete strangers wave and say hello as you are out walking… Derrimut encourages a friendly neighbourhood!

Being a family orientated suburb, it makes sense that the local shopping village is a hub designed to meet the community’s needs. With ample parking, medical facilities, a laundry and a Coles supermarket your daily needs are catered for all in the one place.

The Derrimut Village also has you covered for that all important “I’m too tired to cook” evening. A generous selection of national fast food chains is available as well as a mixture of local take-aways. Yumminess and convenience… what more could you want?

For one of the most exceptional views of Melbourne, the Mt Derrimut Golf & Community Club is the place to dine. Boasting a sensational outdoor terrace, you can choose a romantic dinner for 2 or kick your heels up and party with friends!

Travel to the CBD is easy via the Western Freeway. It can take as little as 10 minutes to get to the Westgate Bridge making it a very convenient commute and an open gateway to Melbourne’s suburbs.

The closest train station is Deer Park which has ample parking and the trains are frequent and fast. An express train will have you at Southern Cross Station within 20 minutes, or you can head down to Geelong and be there within the hour.

In and around Derrimut, traffic flows smoothly due to not sharing the roads with other suburbs. The roads forming the suburb boundaries quickly feed the freeway and ring road meaning you’re on your way fast. This makes traffic noise minimal around homes. And don’t you love that!

Over time, Derrimut has proven to be an excellent development in a great location. The locals describe their locality as “A gem…one of a kind!”

It’s not just the residents who love the area, it’s also home to many animals including bandicoots, native rodents, reptiles, frogs and the fat-tailed dunnart. (Yes… he’s the dunnart with the fat tail!) If you take a wander through one of the largest grassland reserves within the Western Volcanic Plains, Derrimut Grasslands Nature Reserve, you may just see these guys hanging around. Oh… and keep an eye out for the threatened Golden Sun Moth as well.

Residents love Derrimut for this and many other reasons. Come for a visit and see for yourself.