With easy access to Melbourne, Geelong and airports via the freeway, affordable housing prices and a warm and friendly atmosphere, Altona Meadows is an area worth considering. Bordered by creeks to the north-west and south-east and with extensive bay frontage, this wonderful suburb has some of the best walking trails in the region.

If you have an interest in the local property market, Fisher Conveyancing Altona Meadows will assist you with all your conveyancing needs. But first, let’s explore the area a little more. 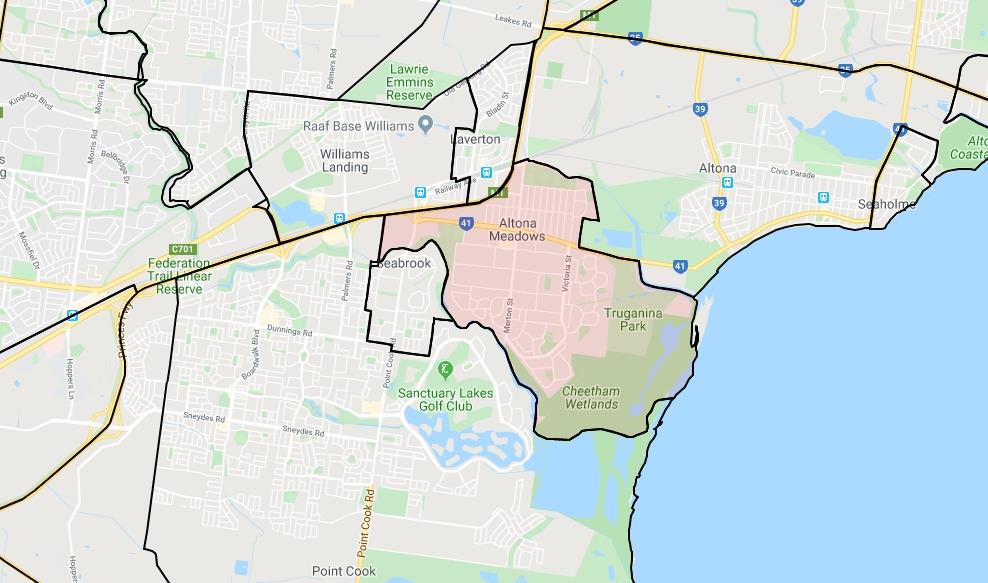 Hi, I’m Natalie Fisher of Fisher Conveyancing. I’ve spent my whole life around this region and know the ins and outs of Altona Meadows conveyancing and real estate transfers. If you have any question, give me a call and I’ll be happy to assist.

The total population of Altona Meadows is 18,745. This population is very evenly spread amongst the age groups as no group exceeds 20% of the total. Median age is 37.

The median weekly household income is $1,227 and the median weekly mortgage repayment is $1,500. 40% of residents are in full-time employment, 18% are part-timers, about 4% are unemployed and 35% are not in the labour market. 17% are in clerical or administrative roles, 16% are in technical or trades based work and 15% are professionally employed.

Average household size equals 2.7. 48% are married, 44% not married and 8% are in de facto relationships.

93% of the population live in fully detached houses, 5% in units and less than 2% are in semi-detached houses. Of these housing types, 37% are fully owned, 36% are being purchased and 26% are rented.

The vast majority (63%) identify as Australian. Other notable nationalities include Indonesian, Dutch and English.

There are three primary schools in Altona Meadows.

Altona Meadows Primary School caters for children from prep to grade 6. AMPS (love that!) currently has 440 students and their Breakfast and Fruit Club brings out the best in the local community and the kids. They also have a walking club, social skills program and guitar and ukulele tuition. Their values include honesty, fairness and inclusion.

Altona Green Primary School is also a prep to grade 6 school and was established in 1990. Currently, 380 children are enrolled. Students are encouraged to respond to high expectations and work effectively with others. They are also instilled with self-confidence and a sense of personal worth. They offer swimming programs, camps and excursions and the Stephanie Alexander Kitchen Garden Program.

Queen of the Peace Primary is a catholic school located in the far east of Altona Meadows. The school covers 2.65ha and has a beautifully maintained sporting area with multiple undercover play zones. They are committed to recognising, celebrating and supporting students in their pursuit of excellence and value working in partnership with parents.

Altona Meadows is a great suburb for walking trails. Chief among them is the 100 Steps of Federation. Set in Truganina Park, this basalt staircase leads to the highest point of land between Melbourne and the You Yangs. Yeah, okay, it’s only 17 meters above sea level but that’s enough to offer wonderful views of Melbourne, Port Phillip Bay and the Cheetham Wetlands.

If you have an hour to spare, walk from here to Altona Beach along a meandering pathway that takes in many local points of interest and tranquil scenery.

Altona Meadows is bounded on two sided by beautiful waterways – Skeleton Creek to the south-west and Laverton Creek to the north-east. Each of these creeks has beautiful paths that are perfect for ambling along to enjoy the wetland scenery.

Additionally, the suburb is dotted with parks and reserves to run the dog, kick the footy through the big sticks or relax with a family picnic.

Altona Sports Centre is home to over 30 clubs and has more than 6,000 registered participants. Basketball, netball and tennis are catered for and this facility is across the park from the Altona Meadows Skate Park.

Central Square Shopping Centre is the local focal point for all your immediate needs. Here you will find Coles, Priceline, Aldi and Big W in addition to a range of specialty outlets that are sure to satisfy your retail therapy requirements.

And you won’t go hungry at the centre! KFC, Hungry Jacks, La Porchetta, Michel’s Patisserie and Espresso Allegro will see to that.

For something completely different, bring your pooch along to Puppy La Pure Bakery on Nelson Avenue. According to their website, they are open 24/7 for those late night/early morning Fido cravings that can’t be satisfied any other way.

There are two direct freeway access on/off ramps. One is at Newland Street in the north-east corner of the suburb and the other is in the north-west corner at Point Cook Road. Beyond that, streets are in a grid formation with major thoroughfares being Merton and Victoria Streets running north/south and Central Avenue running east/west.

There are six bus routes running through the suburb. They cover Laverton Station, Hoppers Crossing Station, Sanctuary Lakes, the three schools mentioned above and Williamstown. The City to Point Cook route is a Night Bus Service.

In addition to the train stations mentioned, Williams Landing is another alternative on the Werribee Line.

It’s a quiet suburb with extensive walking trails, magnificent bay frontage and loads of employment opportunities in the neighbouring areas. Houses are still affordable and the lazy bends in the suburban streets gives the whole place a relaxing feel. With three schools for youngsters and secondary school opportunities nearby, why wouldn’t you further investigate life in Altona Meadows?